How to Cook Frozen Steak in the Oven?
0 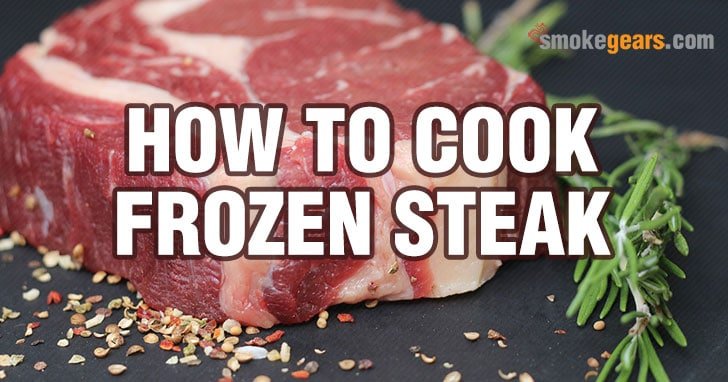 How to Cook Frozen Steak in the Oven?

When I was a young at the age of 14yrs I didn’t understand all about cooking meat. I was known to be a frequent visitor to the fridge.

What amazed me was blocks of bread-like food covered with ice that mum used to keep it on the bottom shelf in the fridge.

Curiosity overwhelmed me and I decided to explore what it was. One day when I was home alone, I took it and observed what it was.

To my surprise, it was frozen meat. This was dad’s favourite meal especially on weekends when he was at home. Mum has been preparing occasionally when there were visitors.

That night I decided to spend time with mum so that I could make inquiries on my new discovery. Mum took her time and explained to me the secret behind frozen meat as one of her favourite dishes.

Have you ever arrived late from job-hungry and tired and the food you need to cook is frozen steak? Many people must have found themselves in such a situation.

Therefore, it is imperative to know the techniques on how to cook the frozen steak.

Have The Right Tools

Before preparing to cook frozen steak, it is mandatory to have the right kitchen equipment. This saves both times and makes cooking easier.

Ensure you have a good quality and well-sharpened knife. The wooden cutting board is also essential for making desired cuttings.

An oven will be a requirement too. It is also important to get yourself a meat thermometer to regulate extend at which your meat cooks to avoid overcooking. You may also require a cast- iron skillet and a spice grinder.

However, the most important tools that are required in this case is:

Unlike thawed steak, this is a bit technical when it comes to cutting because of its hardness. To make the best of it is therefore important to be a bit keen when cutting it.

Cutting frozen steak is easy and safe if it is done appropriately. This saves time that could have been used during thawing.

There are some extra tips you need to know, how to grind meat.

Ingredients form a crucial part of any cooking. It is therefore important to have some if not all of the ingredients that have mentioned below.

At this point, you should have the following:

For instance, you can choose to mix the following to obtain your seasoning paste:

After mixing carefully the above-mentioned ingredients, put it in a bowl and cover it. These ingredients will be used during searing.

Read more: How to defrost?

This is a point whereby we introduce flavour to the steak through searing. A skillet is useful when it comes to this.

However, it is important to oil the skillet using adequate oil. The steak surface should be dry to allow efficient searing. Eventually, the main objective is to obtain golden-brown colour on both sides of stripped steak.

The primary condition to achieve this is to ensure the surfaces of steak are flat enough to allow contact with the oil.

The seasoning paste that you had made can now be applied on both sides of the steak. Thereafter, you place an adequate amount of oil on the pan.

The heat is regulated in such a way that it will not burn up the steak which can lead to a burnt crust which is usually black in colour.

It is therefore recommended that each side of the steak should be given an allowance of 2-3 minutes. During this process there is usually splattering of oil, therefore, it is vital for one to be careful to avoid possible injuries.

It is now clear that a frozen steak can be cooked. Most people prefer cooking thawed steaks.

However, this shows that it is possible to cook the frozen steak without thawing. Through this, you can now cook a more delicious frozen steak.

This is the best method of cooking frozen meat because it allows even cooking and it is moist. It has a unique flavour and in most cases, you can serve it with greens or other additives.

The procedure mentioned above is workable and it can give you one of the best meals you have ever cooked. Feel like a hero today by trying it out.

How To Cook Hamburgers On A Griddle: Safety Tips and Warning